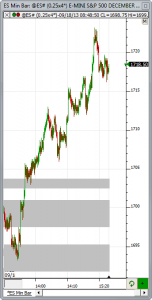 FOMC announcement day…  Given the low volatility and narrow ranges of the last week, there was no reason to expect any difference this morning until the 2pm EDT FOMC announcement.  The ES was only able to move 4 points while waiting on the Fed.  As I posted in chat early this morning, “it’s kind of like waiting for an experimental rocket launch…  one that could blow up or go through crazy gyrations…”  Well the rocket took off beautifully as the Fed had the markets convinced that QE tapering would start and they surprised by not tapering at all.  After a 26 point moon shot, the ES found some agreement around 18.  If you’re a conservative trader, today was a day to be a spectator, not a speculator.  No example trade.

Sorry, the comment form is closed at this time.

Trading Futures, Options on Futures, and retail off-exchange foreign currency transactions involves substantial risk of loss and is not suitable for all investors. You should carefully consider whether trading is suitable for you in light of your circumstances, knowledge, and financial resources. You may lose all or more of your initial investment. Opinions and market data are subject to change at any time.

ALL EDUCATIONAL EXAMPLE CONTENT SHOULD BE ASSUMED HYPOTHETICAL AND IS DISCUSSED FOR EDUCATIONAL PURPOSES ONLY.