This morning was tough trading.  The ES opened in our 71 / 73.5, made a rotation up, and then double bottomed at 70.50.  This long opportunity was perplexing because the ES was down around 14 points and opened close to the low.  The job claims numbers missed expectations and my assumption is that the ES would want to probe below the bottom again.  In this case, I was wrong; the ES turned and went straight up 9 points.  I thought the opportunity was too risky and missed it.

The ES next moved up into the 76.50 / 79 level area.  The second push moved 2 ticks beyond which created another interesting situation.  Here we had the push beyond, yet there were only about 1600 buyers trapped; not really enough to consider trading in the middle of this level range.  If the ES was up near the top of the level range, then it would have been a better opportunity but still a little weak.  Thus a trade was not taken.  The next push up gave us a better shorting opportunity.  There were plenty of trapped buyers and price had moved to the back edge of the level range giving us more room for a good target.  I had selected the VWAP as the target, but unfortunately it  fell two ticks short.  Once I thought it possible that the VWAP might not be reached, the stop was moved in to break-even plus one tick where it eventually got hit.  It’s a shame to give up 6 ticks of in the money profit; the trade should have probably been exited earlier…  Now looking back on the trade, the HVN at 76.50 would have been a better target. 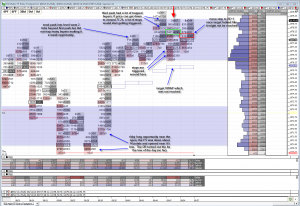 Sorry, the comment form is closed at this time.

Trading Futures, Options on Futures, and retail off-exchange foreign currency transactions involves substantial risk of loss and is not suitable for all investors. You should carefully consider whether trading is suitable for you in light of your circumstances, knowledge, and financial resources. You may lose all or more of your initial investment. Opinions and market data are subject to change at any time.

ALL EDUCATIONAL EXAMPLE CONTENT SHOULD BE ASSUMED HYPOTHETICAL AND IS DISCUSSED FOR EDUCATIONAL PURPOSES ONLY.